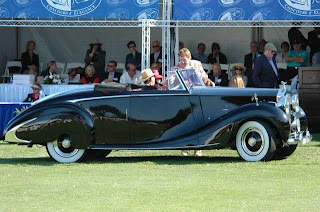 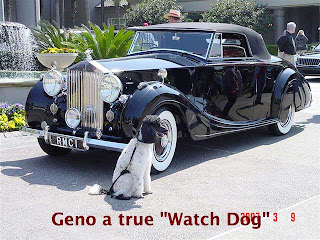 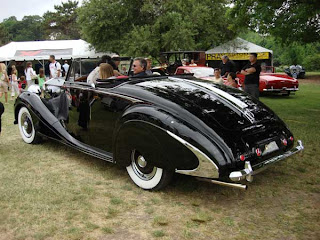 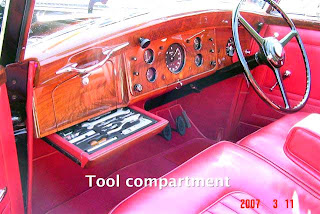 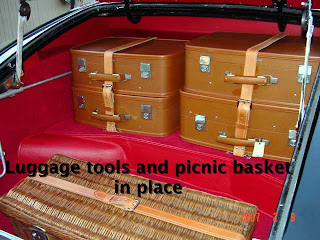 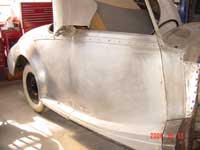 This car was originally designed for Mrs. Sybil Rhodes of Thorpe Underwood Hall, York, UK, formerly of the United States. The original plans for this 'one of a kind' showed it with a 'Dickey' seat, or rumble seat. During construction, plans were changed, and the 'Dickey' seat was eliminated even though initial holes were drilled for its construction. A large refreshment cabinet was ordered, and its design and configuration were also changed to accommodate decanters and highball glasses instead of wine glasses.

This car was unique in numerous ways, showing the individuality of its owner. It is the only two-door, two-passenger Drophead/Roadster ever built by H.J. Mulliner.

This 1950 Rolls-Royce two-passenger Silver Wraith with coachwork by H.J. Mulliner is a unique creation. As with the art of coach building, the design and specifications were often left up to the individual purchasing this vehicle. Park Ward, Mulliner, Hopper, J. Young, and Freestone were notable coachbuilders tasked with creating bodies for these late 1940s and early 1950s Rolls-Royce's.
The Silver Wraith was introduced following World War II and retained many of the designs of the post-war era. The sweeping fenders and separately-mounted Lucas headlights were indicative of the pre-WWII manufacturing.

Under the elegant bodies was a new chassis design, though it borrowed inspiration from the earlier Rolls-Royces. The front suspension was comprised of coil springs and semi-elliptics could be found in the rear. Disc wheels and white wall tires replaced the old wire-wheel design. Under the hood was a 260 cubic-inch six-cylinder engine that produced around 130 horsepower. A four-speed manual gearbox was mated to the engine and mounted either on the column or to the floor.


This Silver Wraith shown is a one-of-a-kind creation and has recently undergone a five-thousand hour restoration that took three years to complete. Upon completion, it was brought to the Amelia Island Concours d'Elegance where it was awarded a Best in Class.

Source - Rolls-Royce Motor Cars
The Silver Wraith, launched in 1947, was an evolution of the pre-war Wraith and was offered in the traditional chassis form ready for the fitting of Bespoke coachwork. The 4,257cc overhead-inlet, side-exhaust engine developed before the war was used, as well as a modified coil and wishbone independent front suspension. Hydraulic brakes were used for the first time on a Rolls-Royce with hydraulic brakes.

The Silver Wraith was constantly refined during its production. The engine was replaced with the 'big bore' 4,566cc in 1951 and automatic transmission was offered as an option in 1952.


Once again the press raved about the car. 'All the world knows that Rolls-Royce carry on an unremitting search for engineering perfection in everything they undertake. The qualities which made their aircraft engines famous, and their cars the finest procurable, are the result of hard work scientifically conducted, and of a painstaking attention to detail from the large to the most minute. And now a new range of cars is about to appear it is believed that the new cars are the best that Rolls-Royce have ever built.'

The Silver Wraith was described like this: 'In common with all Rolls-Royce cars, the Silver Wraith has an indefinable something about it, a delicacy of behavior, which escapes definition in written words. it is a car for the connoisseur in cars'.